New York, NY — With 88 days left until the New York City Democratic Mayoral Primaries, Andrew Yang has taken a lead among Hispanic voters, according to a new Univision poll.

According to the poll, Andrew Yang has the support of 30% of Hispanic voters in New York, and holds a commanding 20 point lead over Eric Adams who is at 10%. Adams is followed by Dianne Morales at 6%, Kathryn Garcia and Scott Stringer at 5%, Maya Wiley and Shaun Donovan at 3% and Ray McGuire at 2%.

Univision’s poll also had Andrew Yang leading the pack among non-Hispanic voters with 25% of the vote. Adams followed at 11%, Stringer at 10%, Wiley at 7%, and Garcia and McGuire both polling at 2%.

Said Freelancers Union President Rafael Espinal, “As a Latino leader from East New York, I have seen firsthand how Andrew and his forward-thinking vision resonates with our community. Andrew understands that our City and the economy aren’t just going to recover on their own – New Yorkers need help. We need vision and we need someone who will focus on results to bring our City back better than it ever was before. Just two weeks ago, I proudly stood by Andrew Yang’s side as our Freelancers Union co-endorsed him because he showed us how hard he’s ready to work to deliver for New Yorkers, which is why it’s no surprise at all to see such strong and broad-based support for him persist.”

Said Congressman Ritchie Torres: “Andrew Yang is a unique transformational leader who wants to help the City he loves so much during its time of greatest need. His message resonates across all communities, across all languages, offering a clean break from ‘politics as usual,’ fully committed to lifting people out of poverty and making our City work for everyone, especially those who have been left behind.”

The poll also demonstrates that Hispanic voters’ top two priorities for the next Mayor of New York City are protecting residents from COVID-19 and getting the economy going again. Notably, Hispanic voters’ concerns with COVID-19 are primarily economic, with voters concerned about being able to pay their bills. 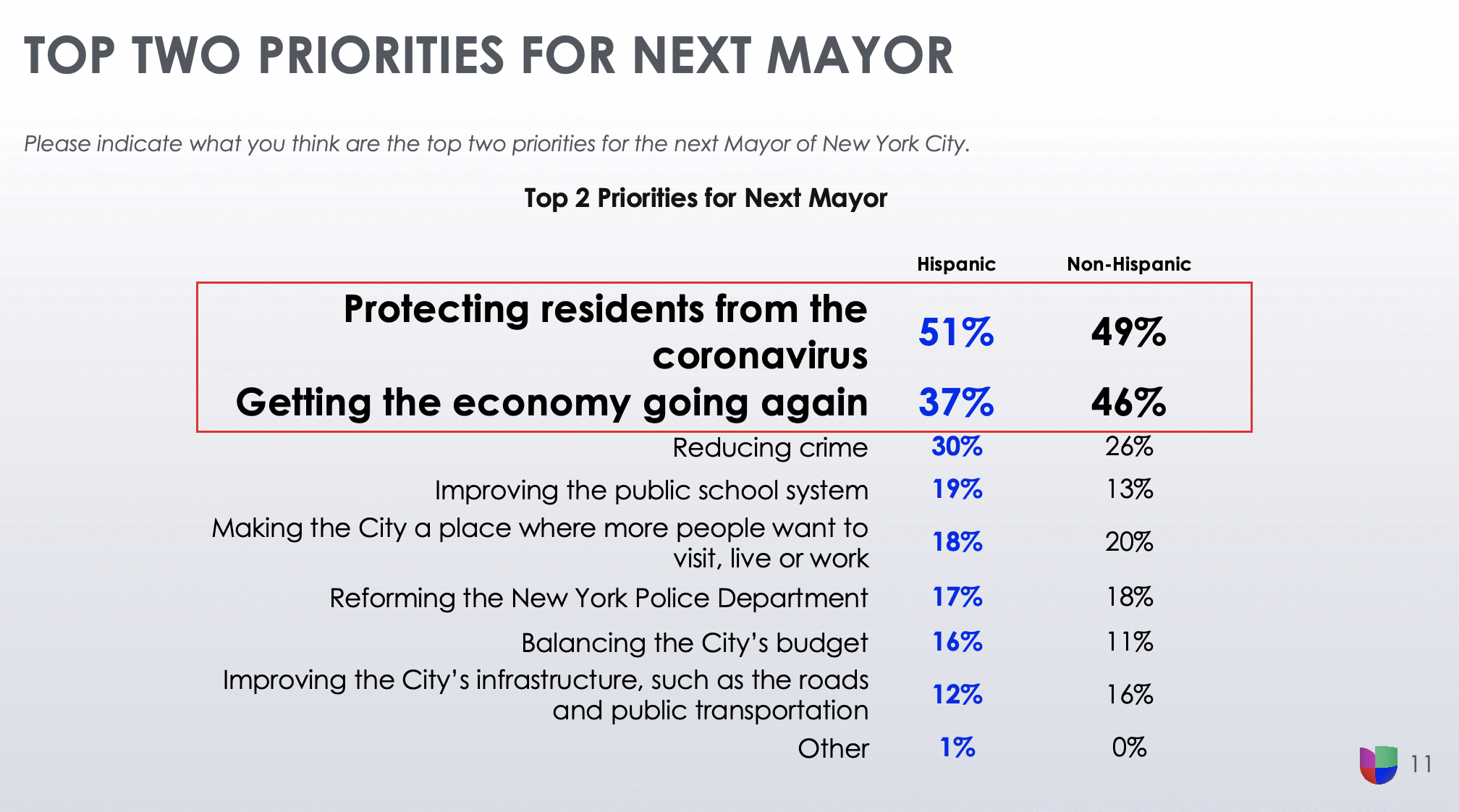 The latest poll shows that Andrew’s message – that he will be an independent mayor who can lead the city’s recovery – meets the moment and mood of the city. Andrew’s laser focus on the city’s economic recovery from COVID-19 – on restoring the character of the City, reopening businesses, bringing back commuters and tourists, and helping families get back to work – appeals to voters across all five boroughs, and especially in Hispanic communities.

Said Andrew Yang, “I am proud that our forward-looking message is resonating so strongly with Hispanic New Yorkers. My campaign is hyper-focused on reopening our small businesses, getting New Yorkers back to work, and restoring economic security for struggling communities.”

Hispanics make up 1.2 million of accounting for almost 1 in 4 registered voters in New York City, nearly a quarter of the city’s electorate. Eighty percent of those polled by Univision said they were likely to vote in June 22nd’s mayoral primary.

University Researcher Sentenced to Prison for Lying on Grant Applications to...